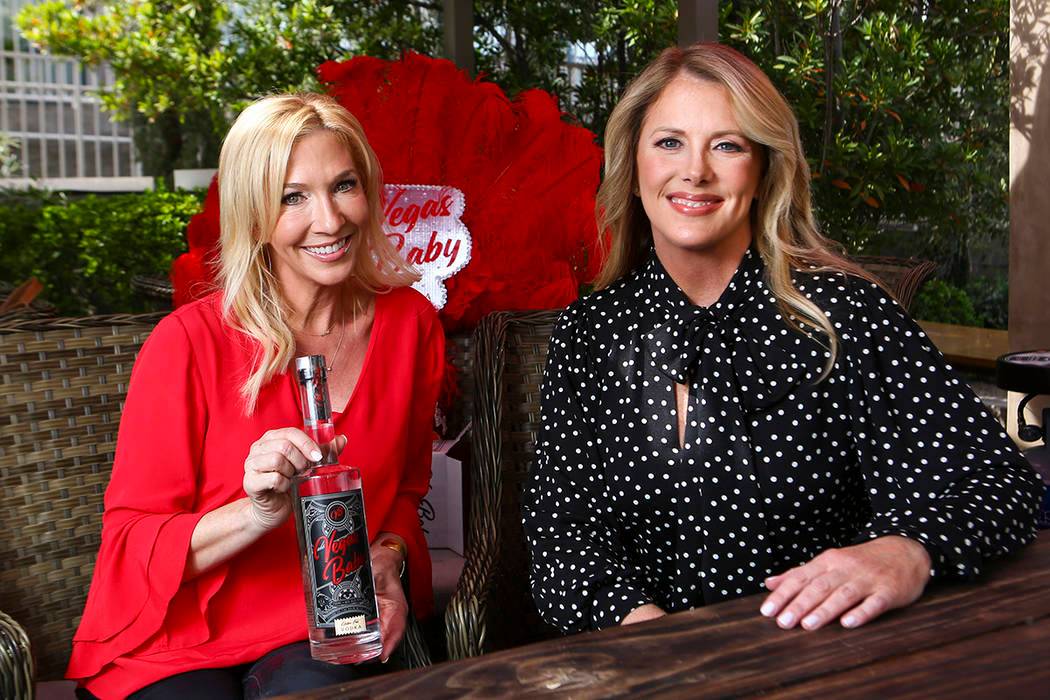 It was about 10 months ago that Jennifer Higgins and Megan Wilkes introduced their baby to the city that inspired it.

“May 10 was Vegas Uncork’d,” recalls Higgins who, along with Wilkes, conceived of, created and owns the Summerlin-based Vegas Baby Vodka. But, she notes, that wasn’t the only event she and her partner had on their schedule that evening, which came just two days after Southern Glazer’s Wine and Spirits signed on to distribute the brand.

“We had committed to be at Uncork’d at the Grand Tasting, and we committed to do JDRF (Hope Gala) the same night. We were so excited.”

The pair estimate they poured about 1,800 shots between the two events, with a little help from some family members. It set the stage for the months that followed, during which they’ve seized any opportunity to get their vodka in front of as many people as possible.

“We’re at every event,” Higgins said recently, over sips of vodka at Dom DeMarco’s Pizzeria, which has been offering Vegas Baby in its cocktails since last June. “We’re putting up the displays in the Luxor by ourselves. We are hands-on at every activation. We are the face and the promoter of Vegas Baby.”

That personal touch has yielded impressive results. Vegas Baby became available to the public at local liquor stores in July. Since then, it’s made its way to retailers across the Las Vegas Valley, and onto bar shelves in The Cosmopolitan of Las Vegas, Station Casinos and MGM Resorts properties. And as pool season kicks into gear, they’re enthusiastically working with hotel mixologists to create drinks for the cabana and daybed crowds. Not bad for a couple of newcomers to the highly competitive spirits market.

Vegas Baby is a local story inspired by Higgins’ frequent trips to Austin to visit her daughter at the University of Texas.

“I got to meet a couple of the bigwigs who own some big spirit companies in Austin,” she says of her early visits in fall 2017.

“In Austin, the local support (for local businesses) is huge. You can’t be in the airport unless you’re a local. Restaurant, vendor, bar — you have to be local. And as I was leaving, and coming into Las Vegas, coming down this escalator a sign just says ‘Liquor Store.’ And I was like ‘Huh.’ ”

At the time, the valley was embracing the brand-new Golden Knights, after rallying together in the wake of the Oct. 1, 2017, massacre. Higgins and Wilkes thought they could contribute to that growing sense of community pride.

One of the first things they did was lock down a name that would capture the spirit of the city. At the time, #VegasBaby had over 6 million mentions on Instagram but was still unclaimed as a trademark for spirits.

“Vegas Baby vodka — it really did roll right off the tongue,” Wilkes says.

After deciding on vodka as their first spirit (“We love our Cosmos,” Higgins says), they partnered with Dry Hills Distillery in Bozeman, Montana, to create the drink. After taste-testing various recipes with friends, they opted for a corn vodka with a smooth, neutral flavor. The packaging, however, would be anything but neutral. The name is emblazoned in bright red on an ornate black and silver front label, with the “Welcome to Fabulous Las Vegas” sign visible to those who peer through the clear glass from the reverse.

“We are from Las Vegas and we love the whole vintage (style),” Wilkes explains. “And we really went back to the old vintage Frank Sinatra days.”

As Vegas Baby grows, its founders think it can spread to other states, and perhaps even other spirits. For now, however, they’re concentrating on making the vodka synonymous with the valley they call home.

“We want to be in every place in Las Vegas,” Higgins says. “We want to be Las Vegans’ brand that they are proud of, and that they can just be in a bar and be like, ‘Do you have Vegas Baby?’ I want to hear that all the time. I just want to know that that brand is …”