Front & Back of the House 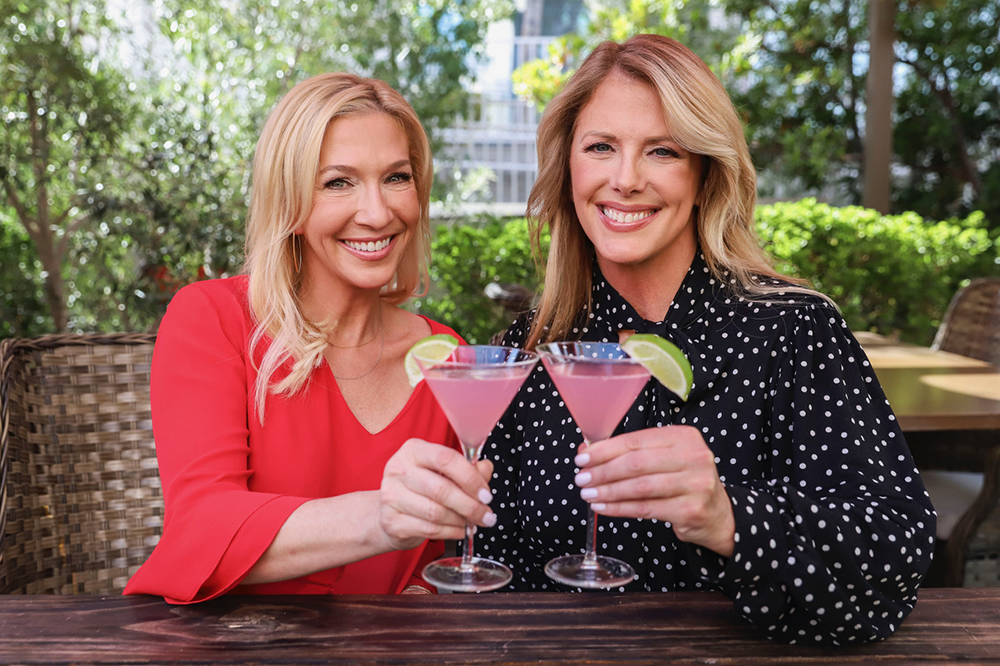 It was the end of 2017, and Jennifer Higgins found herself really liking the Austin vibe while spending time with her daughter who was attending the University of Texas. Analyzing her feelings, she played with ways to bring some of that Austin community-centered energy to Las Vegas, and the kernels of Vegas Baby Vodka were sown.

“I was really impressed by the community feel and how the city supports local businesses,” said Higgins. “There are two well-known spirits coming out of Austin, Tito’s and Deep Eddy vodkas. I just came back to Las Vegas one time, and I thought, you know what, I really wish we had a local spirit that was supported by our city.”

Vegas Baby Vodka was birthed over many glasses of wine when Higgins brought in her friend Megan Wilkes to be her partner in the new enterprise. (Yes, apparently, one drinks wine while creating a vodka business.) Their goal was to have a woman-owned, woman-founded local spirit in Vegas.

They played with a number of names and Vegas Baby Vodka kept coming up the winner. The company’s trademark attorney tried to tell them that “Vegas Baby” anything wasn’t going to be available, period. Higgins and Wilkes finally persuaded him to “just check” and much to his surprise the name was available! One slammed door now open.

To find the boutique distillery they were seeking, the partners turned to the western states. “Many of the craft vodka brands are made in Idaho, Wyoming, Washington and Montana,” Higgins said. “We were really concentrating on those areas because the water was so much better, using the pure Rocky Mountain water as the source was what we were looking for.”

Higgins and Wilkes interviewed several distillery owners and settled on Dry Hills Distillery, spearheaded by Jeff and Erica Droge. “We really liked the values of Dry Hills and that they are fifth generation farmers,” said Higgins. “We got along with them really, really, well and shared a lot of the same ideas so we ended up partnering with them.”

Potatoes, wheat and barley have always been the farm’s main crops. After Jeff and Erica returned from Moonshine University in Louisville, Kentucky, hand-crafted wheat and potato vodkas, potato-based gin, flavored vodka and rye and wheat whiskies were added to the offerings. In addition, the company partners with companies like Vegas Baby Vodka to create and bottle brand-specific products.

Vegas Baby Vodka is corn-based and distilled from non-GMO corn. It has a tiny bit of sweet and is considered to be extremely smooth and neutral. “My dad is 84 and has been a vodka drinker for 64 of those years,” said Higgins. “For a while he drank Kettle One, and he’s tried Tito’s; he’s simply a vodka connoisseur who drinks straight vodka. He (and I know he’s my dad) said Vegas Baby Vodka is the best he’s found for drinking by itself.”

“We got in with them pretty quickly,” said Higgins referring to Southern Glazer’s Wine and Spirits. In working with the Southern team, Higgins and Wilkes made a few changes to the label and their marketing approach. The eye-catching bottle has a slightly vintage look with a black background, red lettering and the “Welcome to Fabulous Las Vegas” sign visible through the vodka from the back.

They finally had a name, a distributor, a well-designed bottle, and most importantly a product they both loved. So, eight months before the COVID-19 shut down, Higgins and Wilkes set out to market their new vodka. They went to hotels and restaurants and introduced themselves to bartenders and conducted tastings. They tried electronic billboards and hired a publicity company.

What they viewed as their real coming out party, was a long article about Vegas Baby Vodka on the cover of the food section of the Review Journal. The duo was rightfully excited, even more so because they had just gotten into MGM locations. Two days later, the city shut down.

However, there are always things to be thankful for. Vegas Baby Vodka is available at Lee’s Discount Liquor and one of the outlets in the airport where the product is selling well. The vodka has been picked up by The Cosmopolitan for the mini-bars. Another thing is that for several months, the distillery was required by the government to start producing hand sanitizer, so the contracted number of bottles wasn’t shipped at a time when sales goals weren’t being reached. Plus, now they have time to strategically determine their next steps, which include additional products and the long-term goal of having a distillery right on the Strip!

Higgins and Wilkes are proud of their accomplishments—and rightly so. They have earned the Women Business Enterprise certification from The Women’s Business Enterprise National Council. It was a grueling process that took several months to complete but will allow them to work with corporations seeking to partner with women-owned businesses. They have staked a claim in the male-dominated liquor industry and paid no attention to the multiple “Noes,” they received in the process and heard only the “yeses.”

Wilke’s advice to anyone starting a new enterprise: “Believe in your product. Make it something you can be proud of. Don’t cut corners. Don’t rush into something.”

If that’s the formula Vegas Baby Vodka used, it obviously leads to success.